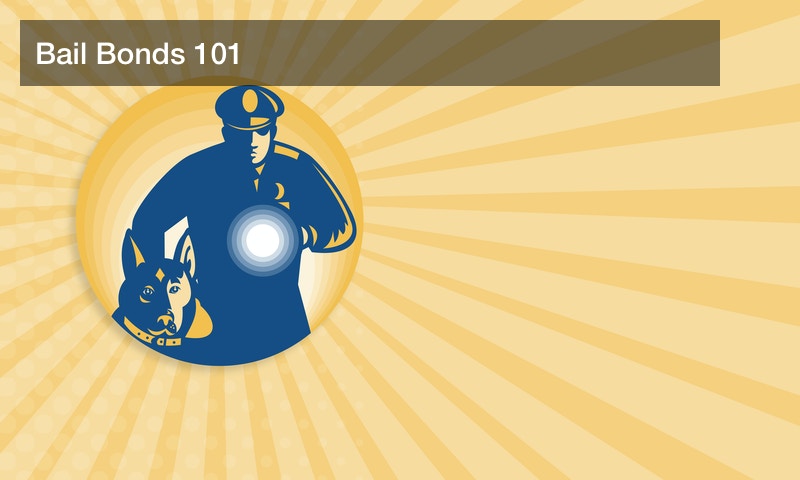 If you ever happen to find yourself in a situation where you’re in jail or you need to help a family member or friend get bailed out of jail, it’s important to remember that getting bailed out is a viable option. While it’s true that bail can sometimes be very high, fully trusting a person will show up to their court date is essential before you make the decision to help them out.

If you need bail bonds explained, here is the nitty-gritty: a bail bond is an avenue for a defendant to pay bail. In legal proceedings, bail is an amount of money determined by a court that a defendant must pay to be released from custody before a trial. It’s important to note that bail is not a fine, nor is it a punishment. It’s very simply a way for a person to not have to stay in jail before their time in court.

In some cases, defendants have the option of paying the full bail amount, assuming of course that the bond amount is small. In cases like these, defendants can use a credit card to pay their bail amounts.

If a bail amount is too large, defendants also have the option of working with a bail bond company. Many times, this is a more viable option because defendants only have to pay a part of the bond upfront. In cases like this, friends or relatives of a defendant. The important thing to remember when working with bail bondsman services is that a bondsman writes up a contract that makes the defendant responsible for showing up in court. If a defendant fails to do so, the defendant is responsible for the full bail amount.

How Do Bail Bonds Work?

If you need bail bonds explained, you also need to know how bail bonds are supposed to work. Firstly, you need to know that the right to bail is provided by the U.S. Constitution. In fact, the Eighth Amendment provides defendants with the right to reasonable bail and protection against cruel and unusual punishment.

People can get arrested at any time, day or night. Thankfully, most bail bond agencies are open 24/7, so any defendant needing to post bail doesn’t have to wait. Essentially, a contract is drawn up between a bondsman and a defendant. The contract spells out that the defendant understands they agree with the amount of bail they’re posting is a means to ensure they will show up for their court proceedings. The contract also spells out any fees involved, as well as if a defendant has to put some form of collateral.

Another key point of having bail bonds explained is understanding that if a defendant fails to show up in court, the bail agent will be responsible for paying the full bail amount to the court. In cases where a defendant may try to evade authorities, a bail agent will most often hire a bounty hunter to track a defendant down.

At bail hearings, a court sets a bail amount. The amount of bail is determined by the details of a case and the nature of the crimes involved. The hearing is typically the first appearance by a defendant after an arrest and the judge takes into account the nature of the crime as well as a defendant’s history and character. If a defendant has criminal defense attorneys, this is their opportunity to discuss different bail factors and they may even be able to have a bail amount lowered by talking to a judge.

As you have bail bonds explained, one question you probably have is how much bail bonds are. That really depends on where you’re at. Different states have maximum fees that bail bonds services have to follow. Those fees also depend on the situation involved in an arrest. This affects the amount of risk that a bail bond agency takes on, in much the same way an insurance company takes on risk when insuring a car or a house.

Since there is a risk, bail agents often require collateral or anything of value that the person who hires a bail agent owns. This includes homes and cars.

While bail is a serious matter, there are many advantages to using bail services and reaching out to bail agents for help with bail bonds:

As you have bail bonds explained, it’s also important to note that there are many different state laws regarding bail. Many states such as Wisconsin, Illinois, Maine have alternative bail systems in place. Some of the different bail laws include:

In Nebraska, a jail takes on the role of a bail bond agency. When bail is set, a defendant has the option of paying a 10% non-refundable fee of the amount of the bail. That fee is then sent to the jail. Prior to a trial, the state will sometimes also monitor a defendant, especially if there’s reason to believe they won’t show up in court.

There are many different bail laws by state, but Illinois has by far one of the strictest systems against private bail agents in place. In Illinois, bail bond agents are banned and an auto accident attorney or another type of criminal defense lawyer can’t post bail for a defendant. Any money paid for release prior to a trial is given to a circuit court clerk and the amount is 10% paid in states like Nebraska.

Kentucky was actually the first state to ban commercial bail, but defendants still have several options for securing a pre-trial release. Defendants can put up in-state property that’s equal to twice the amount of the bail, so if the bail is $50,000, the property put up must be at least $100,000. If someone misses a court date, the state then puts a lien on that piece of property.

Other options include a family member paying the full amount of the bail; usually in cases where the bail is small. Yet another option is paying the 10% amount, which is paid directly to court.

In Maine, a bail commissioner determines a defendant’s bail. That amount can later be forfeited if the defendant fails to appear in court. Another difference in Maine is that if a defendant makes all their court dates, they don’t have to pay a dime for pretrial release. The only exceptions are cases involving assault, such as felony assault and sexual assault. Maine allows defendants to put up in-state property for release. This is what’s called a surety bond.

In Georgia, state courts work together with bail bondsmen and those in the commercial bail bonds industry to manage and enforce the state bail system.

Bail bonding in Oregon is essentially the same as it is in Nebraska, where the state takes on the role of the bail bondsman. The biggest difference is that if a defendant makes their scheduled court dates, then at least 80% of their pretrial release fee is returned. The remainder typically goes toward covering different court costs.

There’s no commercial bail bond industry in Wisconsin, but the 10% of the total bail amount option exists and can be put up by friends or family.

As you have bail bonds explained and different bail laws by state, you’ll learn that Massachusetts has perhaps some of the most unique laws. In Massachusetts, magistrates oversee a defendant’s first appearance in court. If a person is found to be releasable, they pay a $40 court fee. In other cases, a person may be released simply on their own recognizance.

What If You Can’t Pay Bail

Although it is helpful to have bail bonds available as an option for bail, there are times when a bail amount may just be too much. In many cases, folks have been in jail for months or years because they haven’t been able to make bail. As you have bail bonds explained, you’ll come to find out that, in many cases, a bail amount is based on precedent. In minor cases, bail might be as little as $1,000. For more serious crimes, bail might be $100,000 or higher.

A defendant that isn’t able to pay bail still has several options on the table:

As you have read and had bail laws and bail bonds explained, you’ve learned that many states allow a defendant to put up collateral for release. It doesn’t always have to be a piece of property. It can be other items of high value such as cars or jewelry. Putting up collateral allows defendants to secure a bail bond, without feeling pressure to start selling their valuables.

Trying To Get A Lower Bail

In some instances, when someone has committed a crime, posting bail doesn’t automatically guarantee that a defendant will avoid going to jail. If a defendant has committed a serious crime, such as vehicular manslaughter, or is a repeat offender of the law, a court may decide against bail and in favor of jail time.

But going to jail also doesn’t mean someone will stay there forever. In fact, it may offer a chance for someone to be released before the end of their sentence. As an example, if a defendant is arrested and then jailed on drug charges, it may be determined that the best option for them is to get help elsewhere. Rather than being in jail, a defendant may be released to a treatment center. A criminal lawyer may also vouch for their client to be placed under house arrest or be admitted to a halfway house, so they can have some normalcy in life.

As you have had bail bonds explained, you’ve learned about what bail bonds are and how they work. You’ve also learned that there are different types of bail bonds, including cash bonds, which must be paid in cash only and result in a warrant being issued if a defendant doesn’t show up in court; citation releases such as traffic violation bail bonds, where an arresting officer gives a defendant a citation, informing of them of when they need to show up in court; and immigration bonds, which are issued if someone is arrested as an illegal immigrant.

As you’ve had bail bonds explained, you’ve also learned that different states have different bail laws. These laws are designed to help the defendant stay out of jail by offering different payment options. Whether a defendant or their family pays 10% of a bail amount, collateral is used to secure release, or a bail amount is lowered so that it can be paid in full, there are all kinds of options for a defendant. If you find yourself in a situation where you need to post bail, the best thing you can do is familiarize yourself with your state’s laws, so you can plan for the future.